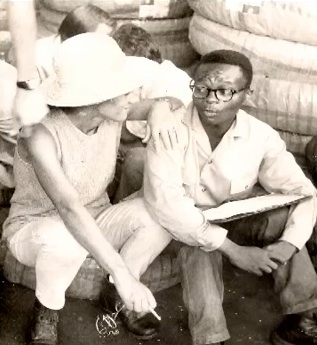 Normally, we always hear of the exile that is of Cuban descent — living abroad in America or Europe. This particular case study is of a Congolese man exiled in Cuba. Assigned to be a translator and teacher for Che Guevara during the Congo mission in 1965, Freddy was shipped off to Cuba for supposedly a few months and was never able to return home. It’s been 40 years away from his motherland and family.

The filmmaker Katrina Hansing (a wonderful woman and Cuba studymaster that I’ve met throughout my East of Havana lecture travels) journeyed into Cuba to find this man. The result is a fascinating exploration into this man’s psyche, his coping mechanisms, and a heartbroken soul eager to see his mother back in Africa before she passes.

If you are in the New York area, this doc will be screened at the Walter Reade Theatre/Lincoln Center in NYC as part of the New York African Film Festival.

In April 1965, Freddy Ilanga, a 15-year-old Congolese youth became Che Guevara’s personal Swahili teacher and translator, during the latter’s secret mission in the Congo to train anti-Mobutu rebels. After seven intense months at Che’s side, the Cuban authorities sent Freddy to Cuba. At first, Freddy thought that his stay in Cuba would be temporary, but 40 years passed during which time he lost all contact with family and homeland. Then in 2003, he received an unexpected phone call from Bukavu, his hometown. His family had finally found him. Co-presented with Human Rights Watch Film Festival. Discussion with special guest!