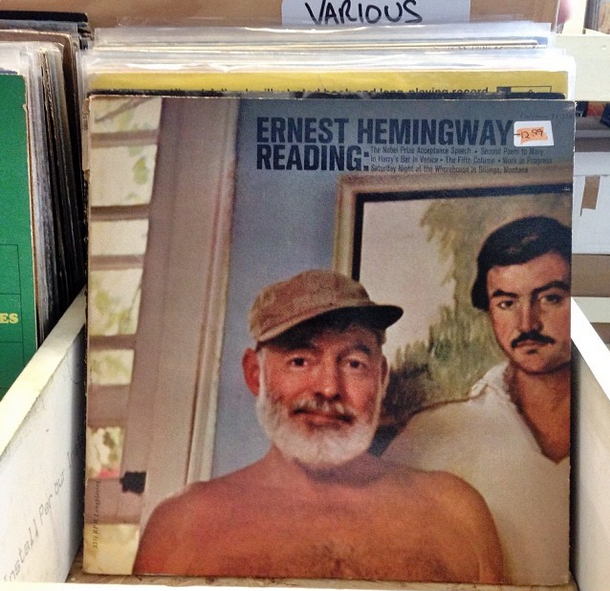 Strolling through a record store in Sag Harbor, I bumped into this precious find, a collection of readings by Ernest Hemingway. Hemingway was an elusive figure in Havana, partaking in all the macho rituals of the Latin man — booze, women, hunting, and fishing… did I mention, drinking? If you visit his home in Cuba, Finca Vigia, you’ll feel the energy and decadence that must have taken place in his backyard pool pre-Revolution. I took my father to the home once, and he sat there in silence a few minutes before sharing the visuals he recalled as a little boy in that home (when my grandfather used to visit him). On a hot balmy day, Hemingway would toss walls of ice in the pool which also doubled as floating device to place your cocktail on.

It’s these personal stories that made me pick up this record and read the liner notes like a little schoolgirl. His wife, Mary, writes the forward notes on the record about how much Ernest hated recording his own voice, calling the microphone “his deadliest enemy” and “the blackest villain that stalked his life”. The album contains 5 recordings, most at Finca Vigia. One is called “Work in Progress” which were conversation tapes Ernest made for Mary while writing. Another is called “Saturday Night at the Whorehouse” about his work The Light of the World. Some of the recordings are poems he wrote for Mary.

Pre-internet days, I would have to told you to go ahead and dig for this record yourself with slim chance, however, today, the tools are different for the curious-minded. There’s a few of these out-of-print records at MusicStack ranging from $23 to $103. It makes a lovely gift for an aspiring writer due to the recording “The Nobel Prize Acceptance Speech”. In it, Ernest endearingly stumbles through the discomfort of his public speaking, yet offers wise words to an aspiring writers.