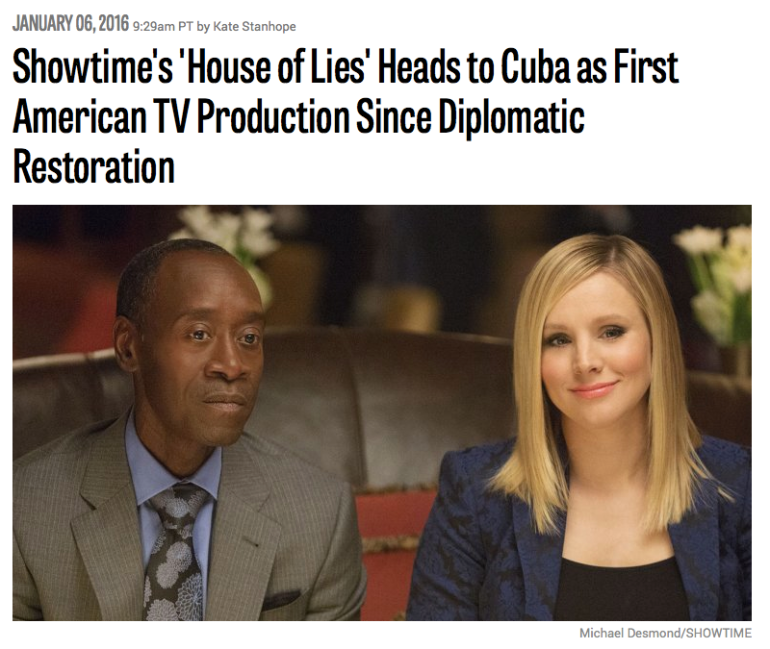 Last week, we all experienced a pretty historical production in Cuba. The cast of Showtime arrived in Havana to shoot House of Lies’  closing episode for Season 5. When you watch this upcoming season, you’ll notice that the penultimate episode for Season 5 (directed by actress Helen Hunt) sets us all up for the next episode plotline… a trip to Havana! Drop the mic.

Why is this such a “game-changer”? Because this is the first time a US scripted TV show shoots in Cuba since pre-Revolution. Sure, there have been a few reality TV productions (allowed under the documentary license at the US State Department) such as Anthony Bourdain, Cuban Chrome, and Conan O’Brian. But this was the first scripted TV show allowed by the US. House of Lies’ Cuba shoot is being done in compliance with the U.S. Department of Treasury pursuant to an Office of Foreign Assets Control license following all appropriate U.S. laws (which clearly are now opening up). You can expect a flood of other networks (HBO or Starz) to movie studios (Fast & Furious, anyone?) coming up right behind them.

We had the chance to visit the set ourselves due the fact we had the honor of producing a musical track on this episode. Our music producer, Edgar AKA Productor en Jefe, sliced and diced a traditional Cuban track which plays earlier in the episode. Consider our track to be sort of a 2.0 remix of this classic Cuban song, complete with rappers throwing rhymes over it. We hope you enjoy the crescendo it builds into. It’s part of the “new Cuban sound” which we at The New Cuba do so very well. I won’t say any more so you can enjoy the episode like a virgin watcher. Suffice it to say, it closes out with a bang.

Back to the show itself, according to CNN, “The plot of Showtime’s House of Lies follows a team of rapaciously cutthroat management consultants, led by Cheadle’s Kaan, who lie and cheat their way to big paydays”. Cheadle tells Deadline.com that in the show, his character “Marty and the pod have traveled the world to land clients. But this historic trip to Cuba is definitely Kaan & Associates’ biggest and wildest adventure yet. It’s sure to be one for the record books, for both our characters and for our cast and crew.”

The title of the episode is “No es Facil” (It’s not easy) probably one of the most spoken phrases in Cuba for the last several years, usually a nice way of trying to say “this is difficult as hell” in regards to getting things done in Cuba. In a strange twist of fate, the American crew knew just what that meant, as the weather kharma gods bestowed upon them several days of rain. The good folks of Showtime took lemon weather and made some tasty lemonade out of it. Each scene filmed beautifully. Despite the bad weather, everyone in production greeted me with a smile on a daily basis. It was a “glass half full” type of week for the crew and actors who were thrilled to be part of this history.

CNN also describes the love fest between the American and Cuban film crews, a strong microcosm of hopefully what is to come after our countries reconcile deeper. “House of Lies producers say they employed a Cuban crew of 120 people and that by the end of the weeklong shoot, the Americans and the Cubans worked as if they had been doing the show together for years”.

We’d like to send a big virtual “high-five” to the producers who were so gracious under such circumstances… Matthew Carnahan (Creator, EP, Director) and his wife, Dir Helen Hunt.  Also big love to Jessika Borsiczky (EP), Lou Fusaro, and Chris Douridas.

One thought on “We Love House of Lies”