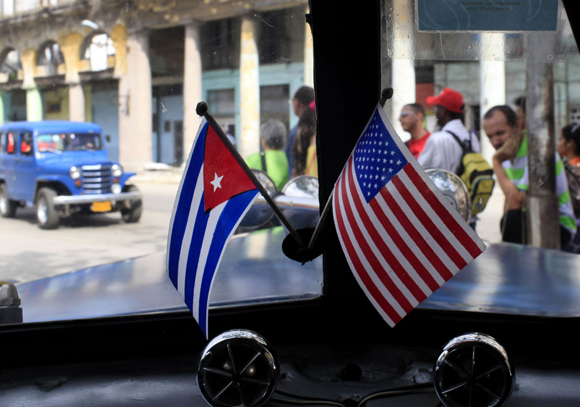 I’ll admit it, I have not written on my Cuban blog for a few months. I’ve been truant on my own mission of trying to stoke the fires of change — to help foster the reconciliation of US/Cuba relations, and work towards a free (yet sovereign) Cuba. Yet the radio show remained my only forum to celebrate Cuban culture.

Ever since I began this blog on MySpace (I realize I am dating myself here), I’ve been questioning my own beliefs, questioning the US administration, questioning Cuban leaders, questioning the intent of Cuban-American hardliners, and desperately seeking to find resolve within all these voices. Then suddenly, I wake up on December 17th to an iPhone blowing up with news. Alan Gross was freed that morning. Obama would speak to the nation at noon. After 55 years of repeated script, the paradigm shifted. Just like that. And so began the explosion in my mind.

I dove into newspapers, TV, internet, lunch chats, Facebook, Instagram, and any possible independent media I could gobble up. There was mostly cheering (by global peers) and jeering (by hardliners). If Cuba loosens up through US engagement, then Obama is a genius. If Cuba’s iron fist tightens up thanks to their newly empowered economy courtesy of the US, then Obama is an idiot. Nonetheless, GAME IS ON. Obama just hit the “redo” button in a masterful game. The nuances are so complicated that only time will tell how this story unfolds. I had always claimed that Fidel was the best chess player of them all, outfoxing 11 American presidents, but the question remains, does Raul know the game?

The important thought is that Obama created an energetic shift. There is no evidence of Cuba promising a democratic society, but the difference with this dance, is that instead of using salt (isolation), Obama is using honey (engagement) to shift relations. I have no idea if this will work, but my heart and mind are intrigued of what is to come. I have awoken from my coma. Since my first trip to Cuba in 1997, and after shooting a documentary and hosting a radio show on the culture, the truth is I got sick of hearing myself say the same thing over and over again. “The Embargo is ineffective”… I felt like a broken record of sorts, while I placed another record on the turntable.

Then December 17th happened. Then 53 political prisoners were released. Six days ago, US announced the easing of travel restrictions to Cuba. I am filled with so much emotion, so much confusion, so many questions. Are we moving too fast? Has it been too slow? But alas, the road ahead is at the very least, NEW and FRESH. It’s almost as if Obama has just ripped off a gooey bandaid that’s rotted for half a century. It hurt everyone like a motherf$%#r. There were lots of screams. Sure, some skin got ripped. What remains is an ugly infection that has been grossly neglected. Will this wound heal? Is it beyond repair? I hope so. But more importantly, the laceration can now receive some air to breathe.

It will most probably get worse before it gets better, which leads me to my next thought. Healing. Some would call it a divine and mystical experience. Let’s move away from all the politics for one second and look at the significance of the exact speech date, December 17th.

According to spiritual tradition, December 17th is the “Feast of San Lazaro” for Roman Catholics. “Babalu Aye” is the equivalent Orisha, who represents the dead or diseased.

In Cuba, both locals and far away visitors congregate at a place called “El Rincon” located South of Havana. It is an annual mecca and arduous pilgrimage with visitors offering prayers, dropping pennies, and asking for miracles. In Hialeah, Miami, there is an equivalent spot also named “Rincon de San Lazaro” mirroring the same activities. On this day, hundreds of Cubans on both sides of the Florida straits were praying in droves and asking for miracles to end suffering. To the spiritually sound, many feel San Lazaro intervened.

Both Cubans, be it on the island or the ones in exile, have a deep faith in the divine which consequently, gets intertwined with politics. Lets take the Elian incident for example. The boy was found Thanksgiving day (1999) in the ocean after 50 hours of being alone in the blistering sun and shark infested waters. All 13 of the 14 people died on three inner tubes that fell off their DIY boat which capsized in a storm. After seeing his mother sink into her ocean grave, Elian prayed to the guardian of the sea to protect him day and night while drifting alone. Finally, a few fisherman discovered the boy, still praying in Spanish. His raft was surrounded by dolphins (note: it is sea folklore that wherever there are dolphins, there are no sharks) which means some Cubans interpreted this as Elian being angelically protected all the way to shore.

The sacred narrative was that Elian, like Moses, was abandoned by his mother to offer him a better life. After being found in the waters, this baby would grow up to lead his people from exile (Miami) back to their homeland (Cuba), just as Moses led the Israelites (to the promised land). It is also interesting to note, Elian was captured by US Immigration on Holy Saturday (AKA, “Easter Eve”, between Good Friday and Easter Sunday) to be returned to his father in Cuba. To Catholics, this was the day Jesus layed in his tomb.

Conversely speaking, there was an opposite mythology from the Castro side. Symbolically representing Ellegua (the divine Orisha), Elian was perceived as a good luck charm that Castro needed to repossess, or forever lose his godly mojo of protection. Many spiritualists theorized why Fidel fought so hard to have this one boy return. Of all the hundreds of thousands of defectors leaving Cuba, this was the “chosen one”, the golden boy who must return to keep the leaders power intact. And thus began the epic tug of war that launched the Elian saga… having this poor little boy used a pawn between 2 nations.

Back to December 17th. An additional factor is the mystical merging of Feast of San Lazaro with the first day of Hanukkah in 2014. It would be the exact day that we would see a Jewish man, Alan Gross, released from exile (a Cuban prison) to return back home (the US).

What does this all mean? Is it a mere coincidence of date? It seemed out of nowhere, yet there has been 18 months of secret negotiations between both nations. Obama was raised by an anthropologist mother, which means, it’s possible Obama might be more of an astute chess player than we imagined. Or was it Raul’s idea? Instead of polarizing narratives (which clash like the Elian saga), this symbolic storyline contained more harmonious ingredients — 2 sides praying for healing and miracles, 2 sides praying to end suffering. On this one day, both Presidential speeches stopped throwing punches, dropped their differences, and requested to seek common ground.

“Let us leave behind the legacy of both colonization and communism” said Obama, pointing out the historical shortcomings of both sides. “Todos somos Americanos.”

Raul spoke through rickety TV sets all over the island: “Cuba reiterates its willingness to cooperate in multilateral bodies, such as the United Nations”. He also spoke about considering the “principles of International Law and the United Nations Charter.” Whether Raul keeps his promise or not, is another matter. Raul continued: “President Obama’s decision deserves the respect and acknowledgement of our people.” Then he broadcast Obama’s face on national television to reaffirm the peace talks. All of Cuba’s youth population was born after the Revolution and deep into Anti-America fever. If seeing an American President speak lovingly on Cuban television was not a miracle, I don’t know what is.

For those that don’t know who Jose Marti was, he is considered one of the founding fathers of Cuba, a Cuban George Washington, if you will. Towards the end of his speech, Obama quoted Jose Marti: “Liberty is the right of every man to be honest, to think and to speak without hypocrisy.” Drop the mic, Obama.

Is this the end of the Cold War in the Western Hemisphere? Well, maybe it’s not the ACTUAL ending, but it is the long awaited thawing. There is ALOT of work to be done. For now, let’s call it “the beginning of the end”… and it all began on December 17th.

Long live San Lazaro…
… and Babalu-Aye. Take it away, Desi!